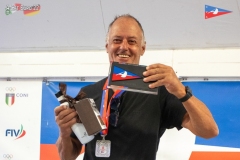 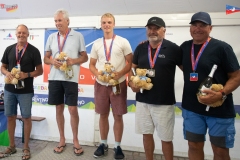 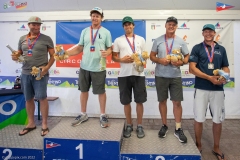 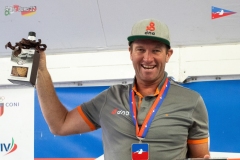 The last day of many championship regattas can sometimes be a foregone conclusion.  One sailor can totally dominate, leaving the rest to battle for the crumbs. At Garda, although a few looked pretty much a shoe-in, neither fleet overnight leader could rest on their laurels.  A breakage, an OCS, a capsize could snatch away their potential crowns.

The Race Committee had two races for the Classics, and one for the open fleet scheduled.  They had unfortunately got the two fleets out of step with each other midweek, with the open fleet sailing two races in a building wind, and then the classics lost out.  However, in the end, they both sailed enough races to get two discards, crucial for some sailors final standings.

The classics took to the water firs and sailed two races.  Fresh from the trauma of Thursday races, where only 10 or so boats managed to get out and off the beach in the big seas, the survivors assembled on the start.  After the traditional floating about waiting for the wind to either switch on, or decide where it wanted to blow from, they all go away cleanly.  This is an interesting observation at this event, but no sailor, in either fleet had an OCS at any point. Even Stevie Brewin was surprised they didn’t get at least one on at least one of their port flyers.  Maybe those GPS marks are the answer….

Looking up towards the North, it looked possible that a storm could be forming.  The wind had started to increase as though it could happen.  A storm is not anything you want to be out on Garda in.  All the sailors would be sent ashore as fast as they can.  The storm would tend to suck air North up the lake.  The result, especially for thoroughbred racers such as the A-Cat, could be fatal.  The whole fleet arriving at the launch site more or less at once would result in boats running into the rocks, each other or ending up on the lee shore.  But fortunately it blew off North, up the valley. And a few were probably blissfully unaware.

As the wind had swung more to the left than previous days, most of the fleet decided to stock with the left rather that the usual ‘bang right and sail at the cliffs’ tactics Garda tends to offer.  That of course didn’t stop Scott Anderson AUS 31 and Marek Zabrowski POL 2 from doing that.  At the top though, it was that little German Fox, Moritz Weis GER 121 coming in from the left, who led Scotty around the mark, followed by Gustavo Doreste ESP 72.  The rest of the race consisted of those little battles that you tend to get amongst sailors of a similar level, and is always talked about ashore.  Moritz got the bullet, Scotty 2nd and Gustavo 3rd.

Their final race saw the wind pick up a bit more maybe 15-16kts, although well in the envelope of the fleet this time, it was Champagne sailing again. Scotty led, but youth won out eventually and Mortiz got his second bullet in a close finish with Scotty.  Gustavo came in 3rd.  And a bit of unofficial team racing lower down the fleet too.  But that mental wind day cost Mortiz the championship even with is 4 bullets, having to discard the pair of DNCs rather than lower position numbers put him behind both Scotty and Gustavo, but will won him Junior Champion to go with his 3rd overall.  Scotty won the event and Gustavo became a well deserved Classic European Champion with his consistency over all the wind conditions.

Next on were the fly-boys and a girl.  Stevie Brewin AUS 4 was the overnight leader but not by that much.  Mischa Heemskerk NED 007 needed to put a 4 boats between him and the likable Aussie, maybe a big ask.  Kuba Surowiec POL 41 could do with the same.  A mistake or breakage by Stevie and he’d be toast.  With Darren Bundock AUS 88 out with an Achilles problem, he had no rear gunner to help in the mix.

The breeze was up and they all set off, the usual port flyer group crossing the fleet again.  As the course was further to the left and the wind was mort to the left also, that cliff was wasn’t as inviting as on previous occasions.  But it was still an increase in pressure and gave a shove to those who ventured right.  Kuba was on a charge and led at the top mark from Stevie, then Mischa and Tymuk Bendyk POL 15.  The rest of the fleet survived the top mark too.  None of that mess with the spreader.  Sorry, I lied.  A wayward kit surfer had drifted a mile down from their zone off Malchesine, and was starting to encroach our beloved spreader with his kit, the sailor followed 30m behind and was still attached.  As the leader whizzed around, they went between his kite and the mark, a tricky aim at pushing 26 kts on the wire, trying to keep the nose from going in.

The true excitement arrived in the form of the next group.  One or two failed to realize that the two safety ribs and the photo rib were not just in that position due to bad driving and poor situational awareness.  Shouting various international swear words suggesting that we got out of the way please.  They were there to protect this, now somewhat anxious kitboarder and his 30m long obstruction until their own rescue rib could arrive and drag him back home, or whatever kiteboarders do when getting rescued.  Had a foiling boat run into the lines, much damage could have been done to all concerned.

But it’s an ill wind, so they say, and a few good pictures were had of one or two boats doing their Das Boot style crash dives.  Paul Larsen AUS 51 was the first to go in, then the sole Finnish sailor, Matti Nieminen FIN 1, pulled off a real crown pleaser right in front of the photo boat, for maximum effect.  No bones or boats broken fortunately.  The rest realized what was happening and either threaded the needle or just when right around the whole lot.

Back at the front the Stevie, Kuba, Mischa, Tymuk battle was still on.  However, the Aussie was starting to slightly pull away, and Mischa dropped back.  At the finish, that was the order.  Stevie get the bullet and thus was the event winner.  Mischa was declared European Champion ahead of Kuba on countback.

There the regatta ended.  Superb sailing in some pretty high-end conditions.  Maybe this is the swansong for the older guys in the fleet?  The young bloods are pushing and will only get faster.  New techniques arrive seeing some younger guys simply getting out on the wire is an education and everyone knows that eventually, you will win one day.

Many thanks to the cast and crew of the Circolo Vela Arco.  The managed a great event and got an almost full race programme completed.  I know that all the sailors would want to return at some point to do it all over again.  But for now, the biggest A-Cat circus will be the same time next year in Toulon and the 2023 World Championships.